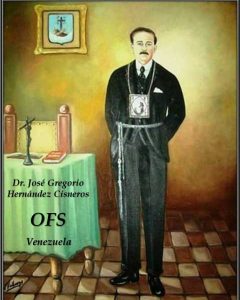 The beatification of Dr. José Gregorio Hernández, a Venezuelan physician (1864-1919) and member of the Secular Franciscan Order since 1899, will be celebrated on April 30, 2021.

José Gregorio Hernandez is widely known, respected and venerated in many countries. A witness of holiness in his layman condition. He was a man full of virtues with a profound experience of his Catholic faith. He had an exemplary medical performance serving patients from all walks of life. It is also worth mentioning his contributions in the field of medical science and in his career as a distinguished university professor. In the Secular Franciscan Order he quenched his thirst for the charism of Saint Francis of Assisi, and thus, little by little, he deepened his commitment to serve Christ in his suffering brother and sister.

He died at the age of 55 in a car accident, while he was going to buy medicines for a poor sick patient. For his beatification, a cure was attested in the girl Yaxuri Solórzano, who was shot in the head, victim of an assault in 2017, and miraculously recovered.

The beatification ceremony on 30 April 2021 at 10:00 a.m. (Venezuelan time) is being broadcast through the YouTube channel of the Archdioceses of Caracas.